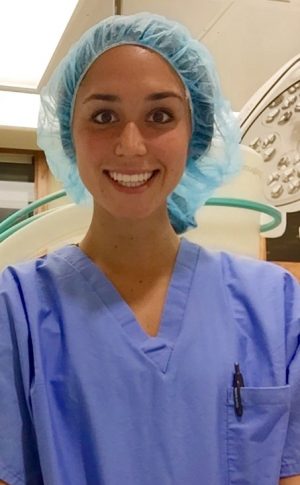 Melissa McCartney became passionate about pursuing a career as an Operating Room (OR) nurse during her clinical sessions as a nursing student at Franciscan University of Steubenville. Still, she never imagined that she would land her dream job after getting married and moving to Nebraska just three weeks after her graduation.After relentlessly searching for open nursing positions that fit her level of experience, she applied on a whim for a job as an OR nurse. Two hours after submitting her application, she got a call for an interview. Reflecting on her time in the workforce, Melissa says her education at Franciscan helped set her up for success in her job.“It’s been such a blessing,” Melissa says. “It’s been the most amazing job ever. The things I have done seem like they’re right out of an episode of Grey’s Anatomy.”

“It’s been a crazy transition,” she adds, “but I was really well prepared.”

Although Melissa says she still had a lot to learn when she first started working, she said that key values instilled in her at Franciscan— a strong work ethic, integrity and holistic patient care—helped her with her learning curve.

She says specifically that Franciscan’s focus on holistic care is a unique facet to the Nursing Program that students at other schools may not receive.

“Franciscan gave me the boldness, compassion, and confidence to live out my faith through my career, especially in the real world around people who might not share my faith,” Melissa says. “Any patient needs compassion and prayer. It’s just another way we can take care of them, and I think that was instilled in me at Franciscan.”

Melissa says it’s “the little things” like incorporating her faith into every aspect of her work whether it be holding a patient’s hand and praying with him or her, or saying a Hail Mary while scrubbing medical equipment—that make her a better nurse.