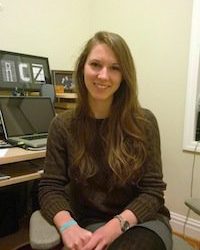 For Holly O’Brien ’13, the strong Catholic values that are naturally part of Franciscan University’s Business Program laid a firm foundation both for her studies and for career success.
“My education was never biased, because it was rooted in the true reality,” she says. “The ethics were so solid, and I didn’t come out questioning things.”

In her senior year, Holly, a management major, joined Students in Free Enterprise (now known as Enactus) and worked on a real-life business project alongside other Franciscan students. Working together as a team to achieve a common goal was a positive experience that made her think, “I might actually enjoy doing this for a living,” she says.

After gaining some tips from an alumnus who gave a talk on finding a job after college, Holly began exploring career options with the help of Franciscan’s Career Services Office, whose director reached out to alumni on Holly’s behalf.

In what she calls an “amazing experience,” Franciscan alumni soon began contacting her to offer advice and résumé assistance. One graduate, a Microsoft employee, helped set up an interview for Holly with Vexcel Corp., a systems integrator company that’s a wholly owned Microsoft subsidiary. She landed a job as a business analyst—and the alumnus is now a mentor to her.

“I can’t stress enough how important it is to network with Franciscan alumni,” she says. “Because we’re Catholic, we have a fraternal bond, and the alumni want to see you succeed,” she says.

As a business analyst, Holly works on a team that manages finances on a project level, tracking and forecasting financials. “Microsoft is an awesome company to work for. I’m happy with what I’m doing,” she says.