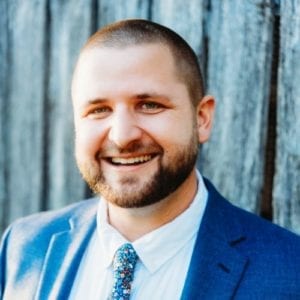 “No matter what you end up doing, you can do it more effectively, more ethically, with an economics degree.”Stephen Hepburn initially planned to major in theology and philosophy, but with strong encouragement from his parents, enrolled instead as an accounting major. His economics course his first semester made him seriously consider switching majors, and after receiving a special exception to spend his second freshman semester in Franciscan University’s study abroad program in Gaming, Austria, and meeting economics professor Dr. Michael Welker, Stephen realized he had discovered a major he loved. Stephen and his wife, Lindsey, were married about a month after graduating in 2009, and moved to Baltimore where Lindsey had found work. Stephen took a job as a restaurant manager, but as his employers made it clear that he could be fired at any time for any reason and with a growing family to support, he needed more stability. Through LinkedIn, Stephen reached out to other Franciscan University alumni in the financial sector and met Rocco Russo, a financial advisor at Edward Jones. Six weeks after meeting Rocco and being recommended by him for a position, Stephen was hired as an Edward Jones financial advisor.“Doing what I’m doing now is more amazing than anything I thought I could be doing,” Stephen says. His financial advising office is located in Baltimore, but he works with clients as far away as Alaska, helping families plan their financial futures and navigate crises. “It’s really rewarding to work with all of these families who, many times, have been lost financially and to be able to help them plan or guide them through a catastrophic event.”

Five years after graduating, Stephen says he still refers to notes he took in classes at Franciscan University. “Being able to understand economics provides a business wisdom that’s missing in the financial services industry,” he says. “What you learn when you study economics at Franciscan is not something you could learn on the job.”